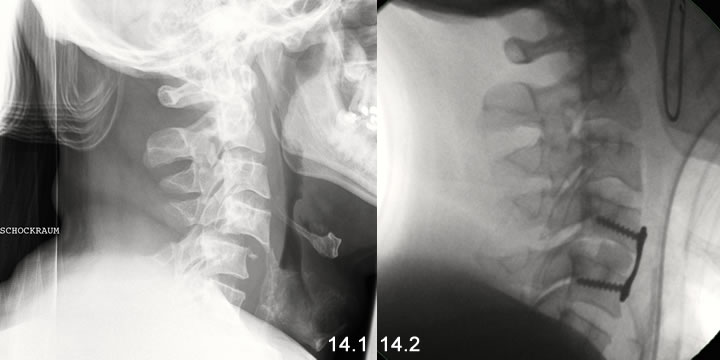 Traumatic injury of the cervical spine with paraplegia occurs when the spinal cord is squashed or severed during an accident. Both the extent and duration of spinal cord compression have a decisive influence on the extent of the accompanying neurological injuries. The extent of functional impairment varies and can extend to complete paralysis of the arms and legs. The height of injury is also of decisive importance. For example, a lesion of the upper cervical spine may result in the loss of respiratory muscle function and death.

In most cases, the affected person can be helped as shown in the following example:

The young man went on a skiing holiday. After 3 days, he made considerable progress and feels safe, so would now like to try a steeper slope. After a few meters, he has already reached high speed and loses control. With great force, he hits the boundary of the ski slope and lies in shock in the snow. He quickly realises that there is neither feeling nor control over his arms and legs.

The snow rescue team is alerted. An emergency doctor takes over the treatment on site and accompanies the patient’s transport with a rescue helicopter into the clinic. The patient’s neck is stabilised during the transport with a stiff neck brace. In the clinic, further examination shows that the loss of strength and sensory feeling of the arms and legs are the result of damage to the spinal cord caused by an interlocked facet-fracture dislocation of the fourth and fifth cervical vertebrae (Fig. 14.1).

The faster the treatment, the greater the chances of recovery. In this case, the immediate correction of the fracture is necessary. The narcosis for subsequent surgery is prepared.

Under anaesthesia, the dislocation can be manually manipulated, that is, repositioned. The dissected disc is then removed (discectomy), replaced with a piece of bone, and fixed with a titanium plate and four screws. This procedure is referred to as anterior cervical discectomy and fusion (ACDF) (Fig. 14.2).

The injury of the spinal cord caused directly by the accident is, unfortunately, so pronounced that despite the operation, neither feeling nor function of the arms and legs recover. The patient is transferred to a special clinic for tetraplegic patients, where he can benefit from a comprehensive range of therapies with different rehabilitation measures.