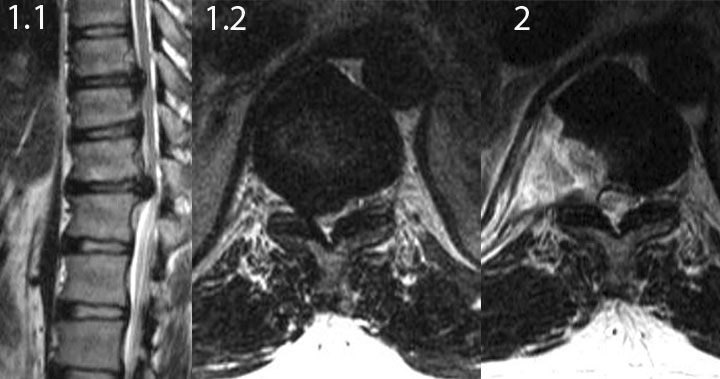 Herniation of thoracic discs are rare, and only make up 0.15% - 4% of all disc hernia cases that can occur. Degenerative changes and disc herniation can occur at all levels (T1-12), but are most frequently seen in the lower third region at the T11-12 level. Mechanical axial back pain, radiating chest pain or paraesthesia (radiculopathy), and/or neurologic deficits and leg weakness are common symptoms associated with thoracic spinal cord or nerve compression (myelopathy).

This 33-year old patient experienced several episodes of mechanical back pain in the past that more or less resolved spontaneously. Three months ago, he began to notice some difficulty when walking (ataxia). More recently, he has become increasingly unsteady when walking or standing, and has an unusual broad-based gait and stance. His friends have noticed that the patient looks like he has been drinking when they see him walking. As a result of progressive weakness in his legs, he also has a tendency to fall.

The patient decides to initially consult his general practitioner. Various examinations were done to rule out any involvement of his heart, lungs or bowel in the symptoms he was experiencing. He was then advised to undergo an MRI assessment of the spine as pathologic reflexes (hyper-reflexia, clonus) and muscle weakness in the legs were confirmed during the physical examination.

The MRI reveals a very large herniated thoracic disc at the T11-12 level that is compressing the spinal cord and causing the symptoms (Fig. 1.1. and 1.2).

In general, many adults have non-symptomatic hernias within the thoracic spine, which can be seen upon MRI examination. Those patients with a thoracic disc herniation, who do experience back pain or paraesthesia (without neurologic deficits) can be successfully treated in a non-operative manner that is tailored to their needs.

However, this case is different. The main reason to undergo surgery is based on the patient’s neurologic deficits that are directly related to the large disc hernia, which causes ongoing spinal cord compression as seen on the previous MRI. The main aspects for surgical planning and decision making are: 1) neurologic symptoms of the patient; 2) texture of the disc material within the spinal canal (hard vs. soft disc); and 3) location of the thoracic disc hernia. For this young gentleman, a combined posterior-anterior procedure was chosen.

The postoperative results show that the spinal canal is completely freed and part of the degenerated disc has been safely removed to decompress the spinal cord (Fig. 2). The patient's symptoms resolve within the next couple of weeks and he achieves full recovery.